Kristine Froseth is an American and Norwegian actress and model. She is best known for her role as Veronica in the Netflix film Sierra Burgess Is a Loser. In 2018, Kristine starred in the Netflix thriller film Apostle, directed by Gareth Huw Evans. Born on September 21, 1996 in New Jersey, USA, to Norwegian parents, she grew up in Oslo, Norway and New Jersey. She began her modelling career after being discovered on a catwalk audition at Ski Storsenter in Norway. She was scouted by the agent from IMG Models at a local mall fashion show in New Jersey. She is notable for modeling for Armani, Juicy Couture, Miu Miu and H&M. 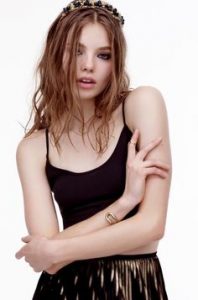 Kristine Froseth Facts:
*She was born on September 21, 1996 in New Jersey, United States.
*In April 2016, she appeared on the cover of Harper’s Bazaar Serbia.
*She was one of the cast members in The Weeknd’s 2016 music video False Alarm.
*Follow her on Instagram.