Samantha Bee is a Canadian-American comedian, author, and television personality. She gained fame as a correspondent on The Daily Show with Jon Stewart, where she became the longest-serving regular correspondent. In 2015, she started her own show, Full Frontal with Samantha Bee. In 2009, Bee had a small role in the romantic comedy film Whatever Works, and portrayed the role of Cinnabon Cashier in the romantic comedy sports film The Love Guru in 2008. Born Samantha Anne Bee on October 25, 1969 in Toronto, Ontario, Canada, to parents Debra and Ronald Bee, she attended McGill University, the University of Ottawa and studied at George Brown Theatre School in Toronto. She became a US citizen in 2014. Bee has been married to Jason Jones since October 13, 2001. They have three children: Piper, Fletcher and Ripley. 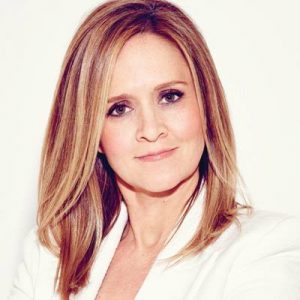 Samantha Bee Facts:
*She was born on October 25, 1969 in Toronto, Ontario, Canada.
*She used to work as a secretary at the Catholic school Bee attended, on Roncesvalles Avenue during her childhood.
*The first non-U.S. correspondent on The Daily Show (1996) with Jon Stewart.
*She became an American citizen in 2014.
*She was part of the comedy-sketch troupe Catch 21 before joining the Atomic Fireballs.
*In May 2017, TIME magazine named her one of the 100 most influential people in the world on their annual Time 100 list.
*Visit her official website: www.samanthabee.com
*Follow her on Twitter, Facebook and Instagram.