Kristofer Hivju is a Norwegian actor. He is best known for playing Tormund Giantsbane in the HBO fantasy series Game of Thrones and for his role as Connor Rhodes in The Fate of the Furious. Hivju is also known for television roles such as Ben in Largest of All, Steinar Hovland in Beck, and Adam & Erik in Twin, as well as film roles such as security chief in After Earth and Michel in Downhill. Born on December 7, 1978 in Oslo, Norway, he is the son of actors Erik Hivju and Lieselotte Holmene and the cousin of French actress Isabelle Nanty. He attended the Danish subdivision of the Russian Academy of Theatre Arts (GITIS) in Moscow, graduating in 2004. He made his debut as Jim Olsen in the 2001 series Fox Gronland. He has been married to Gry Molvær Hivju since August 22, 2015. They have two daughters. 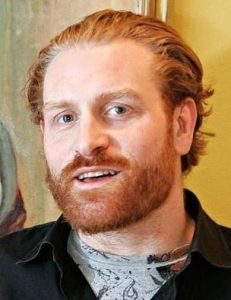 Kristofer Hivju Facts:
*He was born on December 7, 1978 in Oslo, Norway.
*He graduated from Russian Institute of Theatre Arts – GITIS in 2004.
*He spent much of his professional life in Trondheim, Norway.
*He made his theatrical film debut in the 2008 horror film Manhunt as Man 2 / Man in Café.
*He was named the spokesman for Wyndham hotel chains and Wyndham Rewards in 2016.
*In 2018, he worked as an executive producer on the TV series Beck.
*On March 16, 2020, during the 2019–20 coronavirus pandemic, Hivju announced he had tested positive for COVID-19.
*Follow him on Twitter, Facebook and Instagram.