Park Sung-hyun is a South Korean professional golfer, currently playing on the U.S.-based LPGA Tour. Turning professional in 2012 at age 19, Park has won two LPGA majors championships, the 2017 U.S. Women’s Open Golf Championship and the 2018 Women’s PGA Championship. She became the number one ranked golfer in the Women’s World Golf Rankings in November 2017. In 2017, she won the LPGA’s Rookie of the Year Award and went on to share Player of the Year honors with Ryu So-yeon, making Park the first player since Nancy Lopez in 1978 to win both Player and Rookie of the Year honors in the same season. She won the HSBC Women’s World Championship and the Walmart NW Arkansas Championship in 2019. 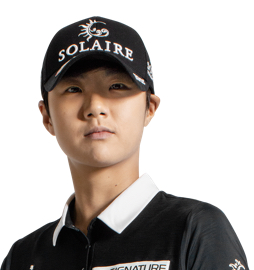