Kriti Sanon is an Indian model and film actress who appears mainly in Hindi and Telugu films. Kriti began her career as a model. She made her acting debut in the 2014 Telugu psychological thriller film 1: Nenokkadine. She debut in Bollywood with the film Heropanti, for which, she earned her a Filmfare Award for Best Female Debut. Born in New Delhi, India, she is the daughter of Rahul Sanon, a Chartered Accountant, and Geeta Sanon, an Associate Professor at Delhi University. She has a sister, Nupur Sanon. 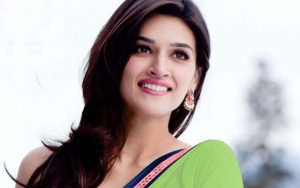 Kriti Sanon Facts:
*Her father, Rahul Sanon, is a Chartered Accountant, and her mother, Geeta Sanon, is an Associate Professor at Delhi University.
*Her first Bollywood film was Heropanti.
*She has one younger sister named Nupur.
*Follow her on Twitter, Facebook and Instagram.