Krysten Ritter is an American television and film actress, former model, musician and author. She is best known for playing the role of Jessica Jones in the Netflix series Jessica Jones, Jane Margolis in the crime drama TV series Breaking Bad, and Chloe in the sitcom Don’t Trust the B—- in Apartment 23. She has also played prominent roles in the films Confessions of a Shopaholic, She’s Out of My League, What Happens in Vegas, 27 Dresses, Veronica Mars, and Big Eyes. As a musician, she is the singer-songwriter and guitarist for the NYC band Ex Vivian. Born Krysten Alyce Ritter on December 16, 1981 in Bloomsburg, Pennsylvania, USA to Garry Ritter and Kathi Taylor, she grew up on a farm in Shickshinny, Pennsylvania. She belongs to German, Scottish, and English descent. She is a 2000 graduate of Northwest Area High School. She has been in a relationship with musician Adam Granduciel since 2014. 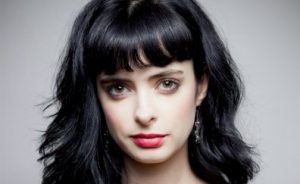 Krysten Ritter Facts:
*She was raised by her mother, stepfather, and sister.
*She was discovered by a modeling agent at Wyoming Valley Mall at the age of 15.
*Her hobbies include spinning, swimming, listening to music, tropical islands, and drinking fresh juice.
*She plays guitar.
*She has a dog named Mikey.
*She supports PETA.
*Follow her on Twitter, Facebook and Instagram.