La La Anthony is an American television personality, actress, businesswoman and New York Times best-selling author who came to prominence in the early 2000s as an MTV VJ on Total Request Live. She hosted the VH1 reality television reunion shows Flavor of Love, For the Love of Ray J, I Love New York, and Real Chance of Love, and was a dean on Charm School with Ricki Lake. As an actress, Anthony has appeared in the films Two Can Play That Game, You Got Served, Think Like a Man, Think Like a Man 2, November Rule and Destined. She starred in the Starz original drama series Power as Lakeisha Grant. She has also appeared in the American reality television series La La’s Full Court Wedding and La La’s Full Court Life. Born Alani Nicole Vazquez on June 25, 1983 in Brooklyn, New York, she is of Puerto Rican descent. She has one younger brother named Christian and two younger sisters, Aviana and Solana. Anthony was educated at Redan High School and went to Howard University, where she studied communications but did not graduate. She married NBA player Carmelo Anthony in 2010. They have a son together. 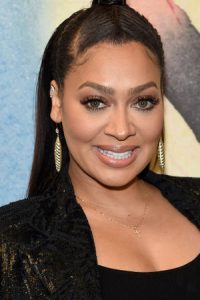 La La Anthony Facts:
*She was born on June 25, 1983 in Brooklyn, New York, USA.
*Her parents are both of Puerto Rican descent.
*At 15, she began her entertainment career in radio at WHTA-FM, HOT 97.5 in Georgia.
*She made her film debut in 2001’s Two Can Play That Game.
*She is friends with Kim Kardashian West, Kelly Rowland, and Serena Williams.
*Follow her on Twitter, Facebook and Instagram.