LaMarcus Aldridge is an American professional basketball player who plays for the San Antonio Spurs of the National Basketball Association (NBA). He plays both the forward and center positions. He played college basketball for two seasons with the Texas Longhorns. Aldridge was selected second overall in the 2006 NBA draft. He spent his first nine NBA seasons in Portland, then signed with the San Antonio Spurs in 2015. He has been selected to five All-NBA teams and is a seven-time NBA All-Star. He is widely known for his signature fadeaway jump shot. 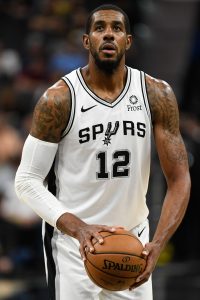 Born LaMarcus Nurae Aldridge on July 19, 1985 in Dallas, Texas, to parents Georgia and Marvin Aldridge, he has a brother named LaVontae. Aldridge attended Seagoville High School, where he became a second-team Parade All-American and Texas Association of Basketball Coaches (TABC) Class 4A Player of the Year. He has two sons named LaMarcus Jr. and Jaylen Lea Aldridge.

LaMarcus Aldridge Facts:
*He was born on July 19, 1985 in Dallas, Texas, USA.
*He was selected second overall pick in the 2006 NBA draft by the Chicago Bulls out of the University of Texas-Austin.
*He was named the Portland Trail Blazers team captain in 2013.
*He spent nine seasons with the Portland Trail Blazers, and signed with the Spurs in 2015.
*He was diagnosed with Wolff-Parkinson-White syndrome, a heart ailment in 2017.
*Visit his official website: www.lamarcusaldridge.com/aldridge/index
*Follow him on Twitter, Facebook and Instagram.