Lana Del Rey is an American singer-songwriter. She became famous after her debut single, “Video Games”, which achieved remarkable success, reaching the number one in Germany and top-ten positions in Austria, Belgium, Netherlands, Ireland, Scotland, Switzerland and UK. Her second album Born to Die (2012) reached at number two on the U.S. Billboard 200. Her song “Young and Beautiful” was nominated for the award for Best Song Written for Visual Media at the 2014 Grammy Awards. She collaborated with Cheryl Cole on her album A Million Lights. Born Elizabeth Woolridge Grant on June 21, 1985 in New York City, to Rob and Pat Grant, she grew up in Lake Placid, New York, and was raised Roman Catholic. She has one younger sister, Caroline, and one younger brother, Charlie. She belongs to English and Scottish descent. She began singing in her church choir when she was a child. She received her first recording contract at 20 while performing at a local club. She studied metaphysics, a branch of philosophy at Fordham University. 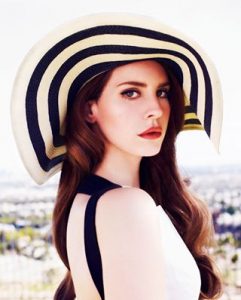 Lana Del Rey Facts:
*She is the oldest of three children.
*She started writing songs at the age of 18.
*She cites Britney Spears, Elvis Presley, Thomas Newman, Eminem, Antony and the Johnsons, and Kurt Cobain as her musical influences.
*She is an avid fan of English Premier League team Liverpool and Scottish Premier League side Celtic.
*She was named 82nd on Maxim’s “Hot 100” of 2014 list.
*She is a huge fan of Guns N’Roses.
*She has a tattoo on her left hand as “M”.
*She is close friends with actress Jaime King.
*Visit her official website: www.lanadelrey.com
*Follow her on Twitter, YouTube, Myspace, Google+, SoundCloud, Facebook and Instagram.