Alessandra Ambrosio is a Brazilian supermodel and actress. She is most famous for her work for lingerie retailer Victoria’s Secret and as a spokesmodel for the company’s PINK line. She has appeared on more than 50 international magazine covers. Ambrosio was featured several times on the Forbes list of best paid models. Born Alessandra Corine Ambrósio on April 11, 1981 in Erechim, Rio Grande do Sul, Brazil, to Lucilda and Luiz Ambrosio, she has one sister named Aline Ambrosio who is a lawyer. She belongs to Italian, Portuguese and Polish descent. She started taking modeling classes when she was 12 years old. In 2008, she became engaged to businessman Jamie Mazur and the couple had a daughter named Anja in 2008 and a son named Noah in 2012. They ended their ten-year engagement in March 2018. 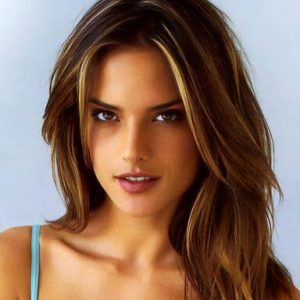 Alessandra Ambrosio Facts:
*She is of Polish, Portuguese, and Italian descent.
*She won a 1995 Elite Model Look contest in Brazil and signed a contract with Elite Model Management.
*She had plastic surgery at age 11 because she felt insecure about her ears.
*She beame a Victoria’s Secret Angel in 2004.
*In 2007, she was placed at #51 in the list of Hot 100 by Maxim magazine.
*She was ranked #2 on AskMen.com’s ‘Top 99 Most Desirable Women’ of 2008.
*She was the only model to appear on the cover of Glamour in 1996.
*Visit her official website: www.alessandraambrosio.com.br
*Follow her on Twitter, Facebook and Instagram.