Actress Lana Parrilla is famous for her portrayal of The Evil Queen/Regina Mills in the ABC’s fairytale drama series Once Upon a Time. She made her television debut in 2000 as Angie Ordonez in the series Spin City. She played Dr. Eva Zambrano in the medical drama television series Miami Medical. Born Lana Maria Parilla on July 15, 1977 in Brooklyn, New York City, New York, USA, she is the daughter of Dolores Dee Azzara and Sam Parrilla. Her father, Sam Parrilla, was professional baseball player who was murdered in 1994. has one older sister named Deena. Since July 5, 2014, she has been married to Fred di Blasio. 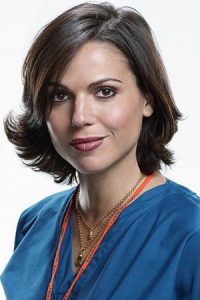 Lana Parrilla Facts:
*Her parents separated when she was three years old.
*She is fluent in Spanish and English.
*From 2000 to 2001, she was a regular cast member in the fifth season of the ABC sitcom Spin City.
*She likes to watch horror and thriller films.
*She is close friends with Robert Carlyle.
*Airwaves chewing gum is her favourite sweet.
*Follow her on Twitter, Facebook and Instagram.