Lara Stone is a Dutch model born in Geldrop, Noord-Brabant. She has been featured on the cover of fashion magazines such as Vogue, Harper’s Bazaar and Forbes. She has also modeled for Victoria’s Secret. Her modeling career was began at age 12 after being discovered in the Paris metro. She competed in the Elite Model Look competition when she was 15 years old. She was born Lara Catherina Stone on December 23, 1983 in the town of Geldrop, the Netherlands to a Dutch mother and an English father. She married David Walliams in 2010, and the couple had a son named Alfred in 2013 before getting divorced in 2015. 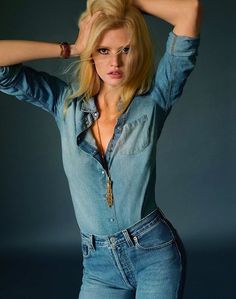 Lara Stone Facts:
*One of the top models of the world.
*She competed in the Elite Model Look competition when she was 15 years old.
*She was appeared in Pirelli Calendar in 2012 and 2011.
*She was ranked #8th on Forbes’s list of top earning models in 2012.
*She has a phobia of flying.
*Follow her on Twitter, Facebook and Instagram.