Laura Wright is an American actress. She is best known for television roles as Ally Rescott Bowman on Loving and The City, Cassie Layne Winslow on Guiding Light and Carly Corinthos on General Hospital. Wright made a cameo appearance in the 2015 film, Joy, alongside General Hospital co-stars Donna Mills and Maurice Benard. Born Laura Alice Sisk on September 11, 1970 in Washington, D.C., to parents Betty and Rector A. Sisk, she was raised in Clinton, Maryland. Wright attended Surrattsville Sr. High in Clinton, Maryland, graduating in 1988. She was married to architect John Wright from 1995 to 2016. They have two children. In 2017, she began dating her former Guiding Light actor Wes Ramsey. 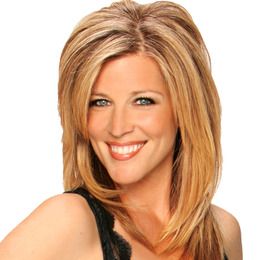 Laura Wright Facts:
*She was born on September 11, 1970 in Washington, D.C., USA.
*She belongs to both English and Irish descent.
*She hosted an infomercial called the American Laser Centers in 2006.
*For her portrayal of Carly on ABC’s General Hospital, she earned the Daytime Emmy Award for Outstanding Lead Actress in a Drama Series in 2011.
*She was best friends and roommates with Kelly Ripa.
*She is close friends with Shannon Law.
*She has a pet dog named Firegirl.
*She is also a Beachbody fitness coach.
*Follow her on Twitter, Facebook and Instagram.