Lauren Conrad is an American television personality, fashion designer, and author. She is best known for her appearances on the reality television series Laguna Beach: The Real Orange County and its spin-off, The Hills. Born Lauren Katherine Conrad on February 1, 1986 in Laguna Beach, California, USA to Kathy and Jim Conrad, she belongs to English, German, and Irish descent. She has one younger sister named Breanna, and one younger brother named Brandon. She is a 2004 graduate of Laguna Beach High School. She has been married to former musician and law school graduate William Tell since September, 2014. Together they have one son, Liam James Tell. 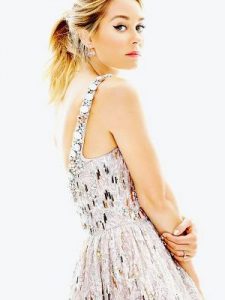 Lauren Conrad Facts:
*She is of English, German, and Irish descent.
*In January 2007, she was named the official spokesperson of “Mark”, a line by Avon.
*She was ranked #56 on the Maxim magazine Hot 100 of 2008 list.
*She was ranked #6 in People’s “25 Beauties (and Hotties) at 25” list in 2011.
*In 2008, she launched the clothing line “Lauren Conrad” in Los Angeles.
*Her favorite movie is Dirty Dancing (1987).
*She has two dogs Fitz and Chloe.
*She was in a relationship with Kyle Howard from 2008 to 2011.
*Visit her official website: www.laurenconrad.com
*Follow her on Twitter, YouTube, Pinterest, Google+, Facebook and Instagram.