Irene Esser is a Venezuelan actress, model and beauty pageant titleholder who won Miss Venezuela 2011 beauty pageant. She represented her country (Venezuela) at the Miss Universe 2012 pageant where she placed third. As an actress, she debuted in the 2014 telenovela Corazon Esmeralda alongside Luis Gerónimo Abreu. She played Camila Espino in the RCTV series Piel Salvaje. Born on November 20, 1991 in Ciudad Guayana, Venezuela, to businessman Billy Esser Bonta, Esser grew up in Puerto Ordaz and Río Caribe, Sucre, Venezuela. After graduating from Don Andres Bello High School in Carupano, Venezuela, she briefly attended Shrewsbury College in the United Kingdom. 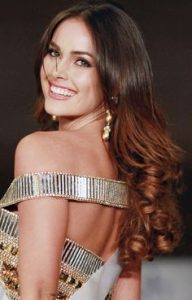 Irene Esser Facts:
*She was crowned Miss Venezuela 2011.
*She is the daughter of businessman Billy Esser Bonta.
*She was raised in Puerto Ordaz and Rio Caribe, Venezuela.
*She is of German and Hungarian descent on her father’s side.
*She is a graduate of the Don Andres Bello High School.
*Follow her on Twitter, Facebook and Instagram.