Laurie Metcalf is an American actress, known for her performance as Jackie Harris on the ABC sitcom Roseanne. She has also had series television roles as Carolyn Bigsby on Desperate Housewives and Mary Cooper on The Big Bang Theory. Born as Laura Elizabeth Metcalf on June 16, 1955 in Carbondale, Illinois to Libby Metcalf and James Metcalf, she grew up in Edwardsville, Illinois. She is of English, German, Scottish, and Irish descent. She has a sister Linda and brother James. She was educated at Edwardsville High School and Illinois State University. 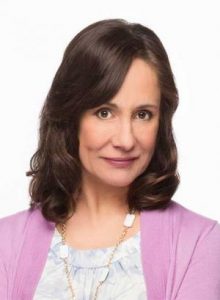 Laurie Metcalf Facts:
*She is the oldest of three children.
*She earned her BA in Theatre from Illinois State University in Normal, Illinois in 1976.
*She was nominated for two Golden Globes and won three Primetime Emmy awards for her performance in the series.
*She is an active member of UNICEF.