Meghan Markle, Her Royal Highness the Duchess of Sussex, is a former American fashion model, spokesmodel, and actress. She is best known for her portrayal of Rachel Zane on the USA legal drama Suits. She became much publicized after her engagement to Prince Harry of Great Britain. Born as Rachel Meghan Markle on August 4, 1981 in Los Angeles, California, to Doria and Tom Markle, Meghan Markle grew up in the Hollywood area of Los Angeles. She is of Irish and Dutch descent on her father’s side, and of African American descent on her mother’s side. She is a Northwestern University graduate with a degree in communications. She married Trevor Engleson in 2011, but They broke up in 2013. She and Prince Harry became engaged in 2017. They married on May 19, 2018, at St. George’s Chapel at Windsor Castle. 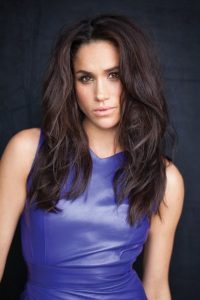 Meghan Markle Facts:
*She was appointed as the Global Ambassador for World Vision Canada in 2016.
*She travelled to Rwanda to campaign for the Clean Water project in 2016.
*She is engaged to marry Prince Harry of the British royal family.
*Follow her on Twitter, Facebook and Instagram.