Lea Michele is an American actress and singer. She is best known for her portrayal of Rachel Berry on Fox’s Glee, for which she received an Emmy Award nomination and two Golden Globe nominations. She played Wendla Bergmann in the Broadway musical “Spring Awakening” and starred as Hester Ulrich in the Fox series Scream Queens. She also portrayed political advisor Valentina Barella in ABC’s sitcom The Mayor. Also a singer, Michele was signed to Columbia Records in 2012. She released her debut studio album, Louder, on February 28, 2014, followed by her second studio album, Places on April 28, 2017. As an author, Michele has written two books titled “Brunette Ambition” and “You First”. Born Lea Michele Sarfati on August 29, 1986 in The Bronx, New York City, New York, she is the only child of Edith and Marc Sarfati. Michele attended Rockland Country Day School for her elementary education, and graduated from Tenafly High School, class of 2004. On March 9, 2019, she married Zandy Reich. She was previously in a relationship with Cory Monteith, Matthew Paetz, and Robert Buckley. 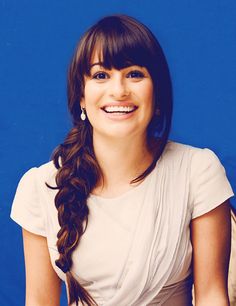 Lea Michele Facts:
*She was born on August 29, 1986 in The Bronx, New York City, New York, USA.
*Her parents are Edith and Marc Sarfati.
*She started her career as a child actress on Broadway, appearing in productions of Les Misérables, Ragtime, Fiddler on the Roof, and Spring Awakening.
*She played on the volleyball team, was a member of the debate team, and sang in the school choir while in high school.
*She made her feature film debut in New Year’s Eve (2011).
*She was signed to Columbia Records in 2012.
*She is best friends with actor Jonathan Groff.
*She was included in Time’s “100 Most Influential People in the World” list in 2010.
*She is a fan of pop singer Kylie Minogue and Fanny Brice.
*She enjoys baking in her spare time.
*Visit her official website: www.leamichele.com
*Follow her on Facebook, YouTube and Instagram.