Adrianne Curry is an American fashion model, actress and TV personality who won the first cycle of America’s Next Top Model in 2003. She has modeled for such magazines as Life & Style, Us Weekly, Star, OK!, Stuff, People, Maxim, Spanish Marie Claire, Macy’s, Famous Stars and Straps, Lucky, Ed Hardy, Kinis Bikinis, Von Dutch, Von Dutch Watches, Salon City, Beverly Hills Choppers, and Merit Diamonds. She was a co-host on the television game show Ballbreakers, and appeared on Gameshow Marathon as a celebrity panelist on the Match Game episode in 2006. Curry starred in “Rock Me Baby”, Half & Half and Dirt. Born Adrianne Marie Curry on August 6, 1982 in Joliet, Illinois, to parents Christine and Richard Curry, she is of Italian, English, Irish, and Scottish descent. She has a brother named Nick. She has been married to Matthew Rhode since September 15, 2018. She was previously married to Christopher Knight from 2006 to 2013. 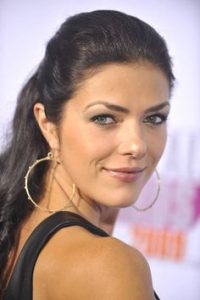 Adrianne Curry Facts:
*She was born on August 6, 1982 in Joliet, Illinois, USA.
*Her parents are Christine Curry and Richard Curry.
*She is the winner of Cycle 1 of America’s Next Top Model.
*Other candidates were Shannon Stewart (Runner-up), Tessa Carlson, Katie Cleary, Nicole Panattoni, Ebony Haith, Giselle Samson, Kesse Wallace, Robin Manning, and Elyse Sewell.
*She is a spokesmodel for “The Flex Belt” alongside Denise and Lisa Rinna.
*Her favorite musicians are Pink Floyd, Jefferson Airplane, Led Zeppelin, The Doors, and Jimi Hendrix.
*She had a pet snake growing up named Vegeta.
*Visit her official website: www.adriannecurry.com
*Follow her on Twitter, YouTube, Facebook and Instagram.