Lee Ann McAdoo is an American journalist, anchor and television host who works for InfoWars.com, a controversial right-wing website run by Alex Jones. She worked as a Music Television Host for Balcony TV Austin from 2011 to 2012. She also appeared in the TV Show ‘The Last Resorts’ as Helen. Born on February 7, 1979 to Kathy McAdoo Johnson and Steve McAdoo, she was raised in Sarasota, Florida. She belongs to Irish descent. Sha has two siblings, brother Shane McAdoo and sister Jennifer McAdoo. She is a University of Texas graduate with a degree in Broadcast journalism (2011). 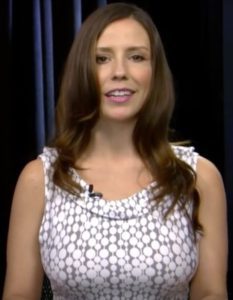 Lee Ann McAdoo Facts:
*Born on February 7, 1979, she grew up in Sarasota, Florida.
*She attended the University of Texas and graduated with a degree in Broadcast journalism in 2011.
*She worked as a music blogger for LegitArt Entertainment in 2010.
*She is a Right-Wing Donald Trump Supporter and vehemently Anti-Hillary Clinton.
*She has a Chihuahua dog, Merlin Jetson.
*Visit her official website: www.leeannmcadoo.com
*Follow her on Twitter, Facebook and Instagram.