Lee Malia is an English musician, best known as the lead guitarist and backing vocalist of the British hard rock band, Bring Me The Horizon (BMTH), the group that released the album Sempiternal in 2013. Born on June 4, 1987 in Sheffield, United Kingdom, Malia began playing tennis at age 11. He married his long-term girlfriend Deni Marie McGonigle in June 2017. 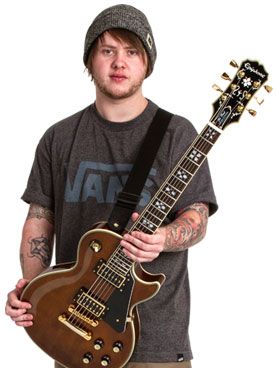 Lee Malia Facts:
*He was born on June 4, 1987 in Sheffield, United Kingdom.
*He helped found BMTH in 2004.
*He is the lead guitarist for Bring Me The Horizon.
*Visit his band’s official website: www.bmthofficial.com
*Follow him on Twitter and Instagram.