Lena Meyer-Landrut is a German singer and songwriter who first achieved fame winning the Eurovision Song Contest 2010 with the song “Satellite.” In May 2010, Lena released her debut studio album, My Cassette Player, which reached #1 on Austria and German music charts. In April and May 2013 she became one of three judges on the reality competition television series The Voice Kids alongside Henning Wehland and Tim Bendzko. In 2017, Lena participated in the fourth season of the German TV show Sing meinen Song – Das Tauschkonzert, the German version of the series The Best Singers. Apart from that she has voiced characters in audio-books and animated films, including A Turtle’s Tale, Tarzan, Trolls and Wonder Park. Born Lena Johanna Therese Meyer-Landrut on May 23, 1991 in Hannover, Lower Saxony, Germany, she is the only child of her parents Daniela and Ladislas Meyer-Landrut. She belongs to German, Baltic German and Hungarian descent. Lena started taking dance lessons at the age of five in ballet, Hip Hop, and Jazz. She represented Germany in the Eurovision Song Contest 2010 in Oslo, and won the contest with her own song “Satellite”. 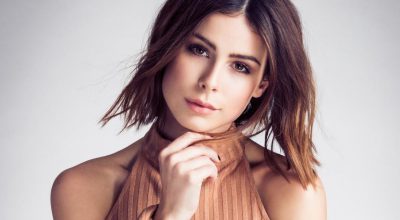 Lena Meyer-Landrut Facts:
*She was born on May 23, 1991 in Hannover, Lower Saxony, Germany.
*She is the only child.
*Her father is Estonian.
*She took dancing classes at the age of five.
*She won the Eurovision Song Contest 2010 with the song “Satellite.”
*She is the German voice of Jane in the motion capture animated film Tarzan 3D.
*She has been a brand ambassador for L’Oréal hair coloring and skin care products.
*She is fluent in both English and German.
*Visit her official website: www.lena-meyer-landrut.de
*Follow her on Twitter, YouTube, Facebook and Instagram.