Leonard Nimoy was an American actor, film director, photographer, musician and author. He was famous for playing Spock in the Star Trek franchise. His performance won him three Emmy nominations. He also starred in Mission: Impossible for two seasons, and hosted the documentary series In Search of…. Born Leonard Simon Nimoy on March 26, 1931 in Boston, Massachusetts, USA, his parents Dora Spinner and Max Nimoy were immigrants from Ukraine. He took acting classes at Boston College and the Pasadena Playhouse. He began acting at age eight in local theater productions, and made his first appearance in the rejected Star Trek pilot “The Cage” in 1965. He married actress Sandra Zober in 1954, and together they had a daughter named Julie and a son named Adam before getting divorced in 1987. In 1989, he married actress Susan Bay. Nimoy died of chronic obstructive pulmonary disease (COPD) in Bel Air, Los Angeles, California at age 83. 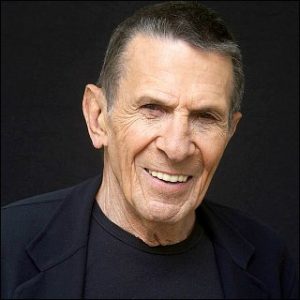 Leonard Nimoy Facts:
*He was born on March 26, 1931 in Boston, Massachusetts, USA.
*He was the youngest child of Yiddish-speaking Jewish immigrants Dora Spinner and Max Nimoy.
*The only actor to appear in every episode and both pilots of the original Star Trek series.
*He was an avid writer of poetry and had written many books.
*He had a pet store in Canoga Park, California during the 1960s.
*He was best friends with his Star Trek co-star William Shatner.
*He died on February 27, 2015 in Bel Air, Los Angeles, California, of end-stage chronic obstructive pulmonary disease. He was 83.