American actress Leven Rambin is most famous for her portrayal of Lily Montgomery & Ava Benton in the soap opera All My Children (AMC). She is also known for her recurring roles in Terminator: The Sarah Connor Chronicles, Grey’s Anatomy, CSI: Miami, Scoundrels, One Tree Hill, and Wizards of Waverly Place. She has also starred in the films The Hunger Games, Chasing Mavericks, Percy Jackson: Sea of Monsters, and Walter. She was born to Karen Stacy Guthrie and Joseph Howard Rambin III on May 17, 1990 in Houston, Texas, USA as Leven Alice Rambin. She has a brother, Joseph Rambin and a half-brother, Jay Rambin and a half-sister, Mary Rambin. She studied acting at Houston School of Film and Theatre and at St. Francis Episcopal Day School. She married True Detective star Jim Parrack in 2015. 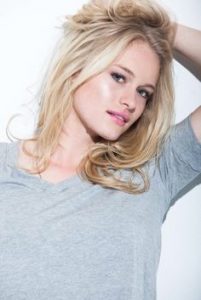 Leven Rambin Facts:
*Her father, Joseph Howard, owns Houston’s largest real estate firm.
*She was once engaged to producer Geoffrey James Clark.
*She finished a youth modeling course through Mayo-Hill/Houston.
*Her favorite sport is field hockey.
*Follow her on Twitter and Instagram.