Chinese actress and singer Li Bingbing, who rose to prominence by portraying the role of Chen Jie in the 1999 film Seventeen Years, for which she won the Best Actress Award. She gained much recognition for her role Ling Chuchu in the television series Young Justice Bao. Her other notable works include 400 boys, Transformers: Age of Extinction, Forbidden Kingdom, and The Message. Li Bingbing was born on February 27, 1973 in Harbin, China. She has a sister Li Xue. 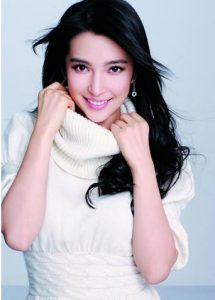 Li Bingbing Facts:
*She was named a WWF Earth Hour Global Ambassador in 2009.
*She started out as a music teacher; she never planned on becoming an actress.
*She is also a member of China Zhi Gong Party.
*First Film: Spirit of Cops(1994) as Shen Fang
*First TV Show: Yilu Denghou (1994) as Du Yuling
*Follow Li Bingbing on Twitter.

“My first time playing a main character was in ‘Seventeen Years.’ It was directed by famous Sixth Generation director Zhang Yuan, but it wasn’t a large commercial film.” – Li Bingbing