American rapper, singer-songwriter and model who was a member of the emo rap collective GothBoiClique. Lil Peep released two full-length mix-tapes; Crybaby and Hellboy in 2016. His second album Come Over When You’re Sober, Pt. 2 (2018), debuted at number four on the Billboard 200. His songs “Benz Truck”, “White Wine”, and “The Way I See Things” have each gained over 4 million views on YouTube. Born Gustav Elijah Åhr on November 1, 1996 in Allentown, Pennsylvania, to parents Liza Womack and Karl Johan, he grew up on Long Island, New York. His parents were both Harvard graduates who divorced when Lil Peep was a teenager. He died on November 15, 2017 in Tucson, Arizona, USA. 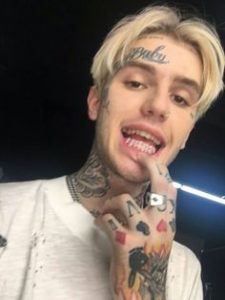 Lil Peep Facts:
*He was born on November 1, 1996 in Allentown, Pennsylvania, USA.
*His real name was Gustav Elijah Åhr.
*He was educated at Lindell Elementary School and Long Beach High School in Lido Beach, New York.
*At 17, he moved to Los Angeles to pursue his music career.
*She started releasing music on SoundCloud in 2014.
*He came out as bisexual on August 8, 2017.
*He died of an overdose at the age of 21.
*He was a fan of the National Hockey League’s New Jersey Devils.
*Visit his official website: www.lilpeep.com
*Follow him on Twitter, YouTube, Facebook and Instagram.