Lily Allen is an English singer, songwriter, actress, and television presenter. She is best known for the hits “Smile”, “The Fear”, “Fuck You”, and her albums such as Alright, Still, It’s Not Me, It’s You, and Sheezus. She is the daughter of actor and director Keith Allen. In 2006, she released her debut single “Smile” which topped the UK Singles Chart for two weeks. Her first studio album, Alright, Still, which achieved remarkable success, earning a three times platinum certification in the United Kingdom, and gold in the US. The album was nominated for Best Alternative Music Album at the 50th Grammy Awards. She began hosting her own talk-show, Lily Allen and Friends, on BBC Three. She released her fourth album No Shame in June 2018. Born Lily Rose Beatrice Allen on May 2, 1985 in Hammersmith, London, England, she is a daughter actor Keith Allen and film maker Alison Owen. She belongs to Welsh, English, and Irish descent. Her siblings are Sarah, Alfie, and Rebecca. She is the goddaughter of Wild Colonials vocalist Angela McCluskey, and 3rd-cousin of singer Sam Smith. She left school when she was fifteen. She became famous through her Myspace account, on which she started posting demo songs in 2005. She married Sam Cooper on June 11, 2011. After having two daughters named Ethel and Marine, they divorced in 2016. 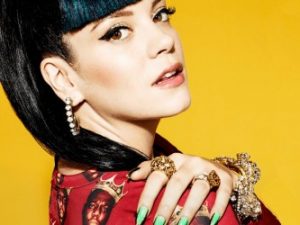 Lily Allen Facts:
*She was born on May 2, 1985 in London, England.
*Her father, Keith Allen left her family, when she was four years old.
*She made her first album, called Alright, Still in 2006.
*She is a supporter of English football club Fulham FC.
*Visit her official website: www.lilyallenmusic.com
*Follow her on Twitter, Myspace, YouTube, Facebook and Instagram.