Megyn Kelly is an American journalist, news anchor, political commentator, and lawyer. She hosts the daytime talk show ‘Megyn Kelly Today’ on NBC, premiered in September 2017. Prior to joining NBC News, she was the anchor of the popular Fox News television program, ‘The Kelly File’. She previously hosted America Live on Fox News. She also hosted the channel’s New Year’s Eve Special Live from 2007 to 2012. Born Megyn Marie Kelly on November 18, 1970 in Champaign, Illinois, USA, to Linda and Edward Kelly, she grew up near Syracuse, New York. Her father passed away from a sudden heart attack when she was 15. She belongs to Italian, Irish, German, and Czech descent. She started her career as a lawyer before changing course to become an assignment reporter in 2004. Following her high school graduation, she attended and graduate from Syracuse University with a Bachelor of Arts degree in political science. She earned her Juris Doctor degree from Albany Law College in 1995. She has been married to Douglas Brunt since March 1, 2008. They have three children: two sons Edward and Thatcher and a daughter Yardley. She was previously married to Dr. Daniel Ronald Kendall. 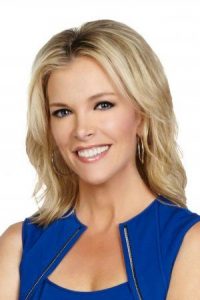 Megyn Kelly Facts:
*She was born on November 18, 1970 in Champaign, Illinois, USA.
*She was a cheerleader in high school and played field hockey, basketball.
*She was named on TIME magazine’s “The 100 Most Influential People” 2014 list.
*She cites Oprah Winfrey as a major role model.
*She is friends with John O’Hurley.
*She has two dogs named Bailey and Boshsha.
*Follow her on Twitter and Facebook.