Lily Collins is an English-American actress who has starred in such films as Priest, Mirror Mirror, The Mortal Instruments: City of Bones, Rules Don’t Apply, To the Bone, Stuck in Love, Abduction, Extremely Wicked, Shockingly Evil and Vile, Tolkien, and Love, Rosie. From 2018 to 2019, Collins starred as Fantine in the BBC miniseries adaptation of Les Misérables. She’s worked as a columnist for British magazine Elle Girl, Seventeen, Teen Vogue, and the Los Angeles Times. Born Lily Jane Collins on March 18, 1989 in Guildford, Surrey, England, she is the daughter of English musician Phil Collins and American Jill Tavelman. She began acting at age two, appearing in the BBC series Growing Pains. She attended the University of Southern California. She has dated Taylor Lautner, Jamie Campbell Bower, Chris Evans, and Charlie McDowell. 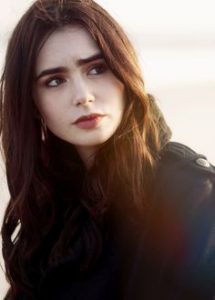 Lily Collins Facts:
*She was born on March 18, 1989 in Guildford, Surrey, England, UK.
*She is the daughter of drummer Phil Collins.
*She was the recipient of the 2008 Young Hollywood Award for Newest Red Carpet Correspondent.
*She made her acting debut in the 2009 biographical sports drama The Blind Side.
*She covered the 2008 US presidential election as a host on the Nickelodeon series Kids Pick the President.
*In 2009, Maxim named Collins one of their “Hottest Daughters of Rock Stars”.
*She was ranked #4 in People Magazine’s 2012 World’s ‘Most Beautiful’ Women.
*She was nominated for a Golden Globe Award for her role as Marla Mabrey in Rules Don’t Apply in 2016.
*In 2018, she became an ambassador of the GO Campaign.
*She loves old antiques and anything vintage and also collects them.
*She is good friends with Kevin Zegers and Jamie Campbell Bower.
*She is longtime friend of actor Eddie Redmayne.
*Follow her on Twitter, YouTube, Facebook and Instagram.