Katherine Kingsley is a British actress. She has performed in such iconic venues as the Donmar Warehouse, the Menier Chocolate Factory and numerous West End Theatres. She has been nominated for two Olivier Awards; one in 2009 for her role as Marlene Dietrich in the Donmar Warehouse production of Piaf!, and the second in 2012 for her role as Lina Lamont in Chichester Festival Theatre production of Singing’ in the Rain at the Palace Theatre. Aside from her stage work, Katherine has also worked for BBC and ITV in various TV projects including, The Bill and Casualty, Uncle Series 2, Bad Education, and the Michael Grandage film, Genius. In 2016, Katherine appeared in “Hated in the Nation”, an episode of the anthology series Black Mirror. Born on December 24, 1981 in Cambridge, United Kingdom, Katherine did her schooling from Parkside Community College and Long Road Sixth Form College, and studied theatre at the Bristol Old Vic Theatre School and the English National Opera’s The Knack. In 2013, Katherine married actor/singer Dominic Tighe, whom she met while filming an advertisement for a shampoo. They have a son together. 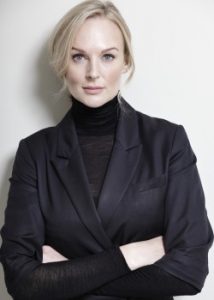 Katherine Kingsley Facts:
*She was born on December 24, 1981 in Cambridge, United Kingdom.
*She studied acting at the Bristol Old Vic Theatre School and at English National Opera’s The Knack.
*She is a three time Olivier Award Nominee.
*Follow her on Twitter and Instagram.