Actress Linda Park who rose to prominence by portraying the role of Hoshi Sato in the television series Star Trek: Enterprise. She is also known for her roles as Maggie Cheon in the television drama series Crash, and as Denise Kwon in the American police procedural and legal drama Women’s Murder Club. She played Jun Park in the television series Bosch. She made her feature film debut with a small role as Ellie Satler’s assistant in 2001’s Jurassic Park III. Born in Seoul, South Korea, on July 9, 1978, Linda Park grew up in San Jose, Calfornia. She earned her a Bachelor of Fine Arts degree from Boston University in 2000. She is married to American actor Daniel Bess. 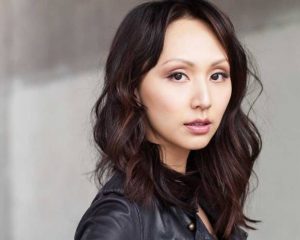 Linda Park Facts:
*She was born in Seoul, South Korea but raised in San Jose, Calfornia.
*She is fluent in Korean, English, Spanish and a bit of French.
*She is a bronze-level international ballroom dancer.
*In 2003, she began dating British actor Tom Hardy. Their relationship lasted until 2004.
*Not a relation of Canadian-American actress Grace Park.
*Follow her on Twitter.