Lindsay Price is an American actress and singer. She is best known for her portrayal of Janet Sosna on the original version of the series Beverly Hills 90210, and for her role as Victory Ford on NBC’s Lipstick Jungle. She also appeared as An Li Chen on the daytime soap opera All My Children and as Michael Lai on The Bold and the Beautiful. Her other notable appearances include: Eastwick, Jack & Jill, Coupling, Pepper Dennis, and Splitting Up Together. As a singer, Price wrote and performed on a five-song Extended play entitled Someone Like Me, which was released in 2007. Born Lindsay Jalyn Price on December 6, 1976 in Arcadia, California, her parents Haeja Diane Price and William Price were raised together as siblings, as the Price family had adopted the orphaned Haeja from Korea after the Korean War. Lindsay has one older brother named Bryan. She attended the Pasadena College of Arts and Crafts (now called the Art Center College of Design) in Pasadena, California. She began dating Australian celebrity chef Curtis Stone in 2009 and they got married on June 8, 2013. They have two sons. She was previously married to television producer and director Shawn Piller from 2004 to 2007. 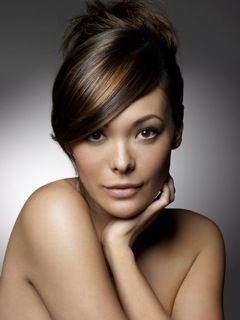 Lindsay Price Facts:
*She was born on December 6, 1976 in Arcadia, California, USA.
*She is of German and Irish descent on her father’s side, and of Korean descent on her mother’s side.
*She started her career singing the Toys-R-Us theme song in one of their commercials.
*She was a contestant on the game show I’m Telling! with her older brother, Bryan.
*She is longtime friends with Tiffani Thiessen.
*Visit her official website: www.lindsaypricemusic.com
*Follow her on Facebook and Instagram.