Cara Delevingne is a British fashion model, actress and singer who won Model of the Year at the British Fashion Awards in 2012 and 2014. She has worked as the face of Burberry, Chanel, Moschino, Oscar de la Renta and Stella McCartney, and has been featured on the cover of a number of publications including Russh, Vogue, Emirates Woman, Look, Miss Vogue, Jalouse, Tush, Glamour, Grazia, Nelly, S Moda, i-D, Style.com, and Love. As an actress, Delevingne has appeared in films such as Paper Towns, Suicide Squad, and Valerian and the City of a Thousand Planets. Born Cara Jocelyn Delevingne on August 12, 1992 in London, England, to parents Pandora and Charles Delevingne, she was raised in Belgravia, London. She has two older sisters, Chloe and model Poppy Delevingne. She attended Frances Holland School for Girls near Sloane Square. She also attended Bedales School in Hampshire, England. Delevingne signed with Storm Management after leaving school in 2009 and started her acting career with a minor role in the 2012 Anna Karenina film, an adaptation of Leo Tolstoy’s novel. From late 2014 until mid-2016, she was in a relationship with the musician, Annie Erin Clark, better known by her stage name, St. Vincent. In 2018, she began dating Ashley Benson. 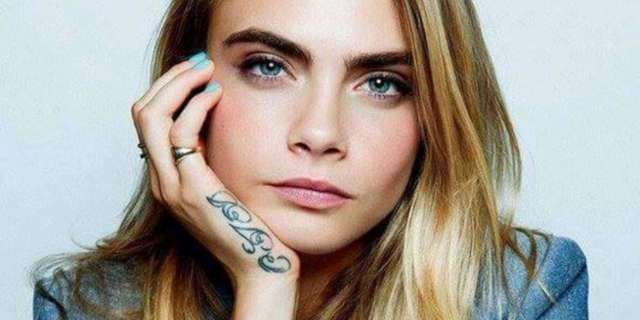 Cara Delevingne Facts:
*She was born on August 12, 1992 in London, England, UK.
*She is the older sister of model Poppy Delevingne.
*She was discovered by Sarah Doukas, CEO of Storm Models Management.
*She started her acting career in 2012.
*She was ranked #10 on Maxim’s “Hot 100” of 2014 list.
*She was named in the list of “Top 50 Models” by models.com. #25
*In August 2015, she quit modeling to focus on her acting career.
*She is best friends with model Kendall Jenner.
*She is a fan of actress Charlize Theron.
*She is good friends with Amber Heard and Margot Robbie.
*Her godmother is actress Joan Collins.
*She likes to play Scrabble and Boggle.
*Visit her official website: iamcaradelevingne.tumblr.com
*Follow her on Twitter, YouTube, Facebook and Instagram.