Lindsey Graham is an American politician serving as the senior United States Senator for South Carolina since 2003. From 2019 Graham is the Chair of the Senate Committee on the Judiciary. He is a member of the Republican Party. Born Lindsey Olin Graham on July 9, 1955 in Central, South Carolina, to parents Millie (Walters) and Florence James “F.J.” Graham, he is of Scots-Irish descent. He has a younger sister named Darline. After graduating from D. W. Daniel High School in 1973, Graham joined the Reserve Officers’ Training Corps. He attended and graduated in 1977 from the University of South Carolina with a B.A. in psychology, and from the University of South Carolina School of Law with a J.D. in 1981. In 1992, he was elected to the South Carolina House of Representatives from the 2nd district, located in Oconee County. Graham has never been married and does not have a wife nor children. 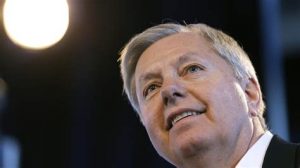 Lindsey Graham Facts:
*He was born on July 9, 1955 in Central, South Carolina, USA.
*He studied at the University of South Carolina.
*He is a Republican.
*He was a member of the Judiciary Committee during the impeachment of President Bill Clinton in 1998.
*He won a seat in the Senate in 2003.
*He never lost an election during his political career.
*He was close friends with the late Arizona senator John McCain.
*Visit his official website: www.lindseygraham.com
*Follow him on Twitter, YouTube, Facebook and Instagram.