Michael Trevino is an American actor. He is best known for his portrayal of Tyler Lockwood on The CW’s supernatural drama series The Vampire Diaries. His other television credits include The Riches, Cane, 90210, The Originals, and Roswell, New Mexico. Trevino has also appeared in several films, including Love Finds a Home, The Factory, and Out of Control. Born Michael Anthony Trevino on January 25, 1985 in Montebello, California, he grew up in Montebello, California. His mother was originally from Zacatecas, Mexico, and his father was born near Fresno, California. He made his television debut at age 20 in an episode of Summerland. He was in a relationship with actress Jenna Ushkowitz from 2011 to 2014. 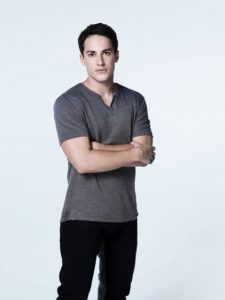 Michael Trevino Facts:
*He was born on January 25, 1985 in Montebello, California, USA.
*He is of Mexican descent.
*He suffered from anxiety and depression issues as a teenager.
*He is an avid surfer, snowboarder, and deep sea fisherman.
*Follow him on Twitter, Facebook and Instagram.