Lindsey Vonn is an alpine skier from the United States. One of the world’s top skiers, Lindsey Vonn has won four Overall World Cup titles in the Audi Alpine Ski World Cup, three Downhill, two Super-G, and one Combined title. She won the gold medal in downhill at the 2010 Winter Olympics, the first ever in the event for an American woman. Born Lindsey Caroline Kildow on October 18, 1984, in St. Paul, Minnesota, to Linda Anne and Alan Lee Kildow, she was raised in the Twin Cities metropolitan area in Burnsville, Minnesota. She belongs to Norwegian descent. Her siblings are Karin, Lauren, Dylan and Reed Kildow. She started skiing at the age of three. When Vonn was twelve her family moved to Vail, Colorado for her training. She won her first international championship when she was 15 and competed in her first Olympics at 17. She was married to former skier and fellow 2002 Olympian Thomas Vonn from September 29, 2007 to 9 January 2013. She dated Tiger Woods for two years. From 2016 to 2017, she dated Kenan Smith. 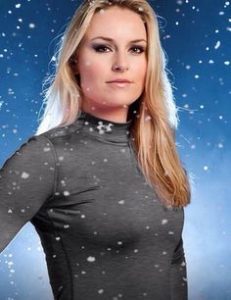 Lindsey Vonn Facts:
*She was born on October 18, 1984, in St. Paul, Minnesota.
*She started skiing at the age of 3 near her Minneapolis home.
*She met her hero and role model Olympic gold medalist ski racer Picabo Street at age 10.
*She competed in her first international competition at age fifteen.
*She was on the United States Ski Team, and she is one of only five women to win a World Cup race in all disciplines of alpine skiing.
*She was ranked #59 on Maxim’s “Hot 100” list in 2010.
*Visit her official website: www.lindseyvonn.com
*Follow her on Twitter, Facebook and Instagram.