Lisa Wu is an American television personality and actress. She is best known for her appearances on reality series The Real Housewives of Atlanta and Hollywood Divas. Wu is also notable for her real estate and clothing line endeavors. She wrote, produced and starred in a feature entitled “Blackball” and co-produced a feature “Tapped out”. She has also appeared in the films “Must be the Music”, “Envy or Greed”, “First impressions”, and “The Internship”,  and has appeared as a guest-star in several television shows. Wu co authored a book with Miasha Coleman entitled “When the cake is made” which is being adapted for the screen. Born on January 23, 1973 in Inglewood, California, to a Afro-Caribbean mother and Chinese father, she grew up in Los Angeles’s Inglewood suburb with three siblings. She started her career as a backup dancer for musical artists and bands such as Candyman, EPMD, and Public Enemy. From 1992 to 2002, Wu was married to R&B singer Keith Sweat. They had two sons, Justin and Jordan. She married NFL player Ed Hartwell in 2005, and the couple had a son named Ed, Jr. in 2007 before getting divorced in 2011. 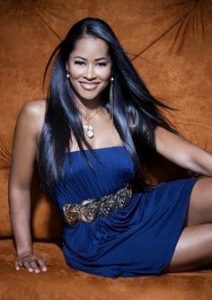 Lisa Wu Facts:
*She was born on January 23, 1973 in Inglewood, California, USA.
*She started her career as a backup dancer.
*She wrote, produced, and appeared in the 2003 film Black Ball.
*She was cast on the Real housewives of Atlanta seasons 1,2 and 3.
*Her elder brother, Meho, is deceased.
*Visit her official website: www.officiallisawu.com
*Follow her on Instagram.