Chinese supermodel Liu Wen is famous for her work as a Victoria’s Secret lingerie model. She appeared in four Victoria’s Secret Fashion shows from 2009 through 2012. She was first Chinese model to walk the Victoria’s Secret fashion show. She has appeared on the cover of fashion magazines such as Vogue, GQ, Allure, Numero, Harper’s Bazaar, V, and W. Born on January 27, 1988 in Yongzhou, Hunan, China, into a working-class family, she is an only child with no siblings. At the age of 17, she entered the New Silk Road World Model Contest which led to her getting work as a model. 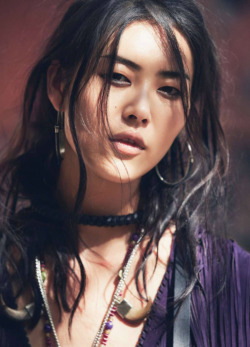 Liu Wen Facts:
*She was born on January 27, 1988 in Yongzhou, Hunan, China.
*She began her modeling career in 2005.
*In 2010, Wen became first ever Asian spokesmodel for cosmetics brand Estée Lauder.
*The New York Times dubbed her “China’s first bona fide supermodel” in 2012.
*In 2013 she became the first Asian to be in the top five on Forbes’ list of the world’s highest-paid models, as number 5.
*In 2013, she was ranked #5 on the Top 50 Models Women List by models.com.
*She is friends with fellow models Joan Smalls, Lindsey Wixson and Constance Jablonski and fellow Chinese models Fei Fei Sun, Sui He, Shu Pei, Du Juan, Xiao Wen Ju, and Ming Xi.
*Follow her on Twitter, Facebook and Instagram.