Liu Yifei is a Chinese actress who has established herself as one of the most beautiful actress in China. She has played prominent roles in films such as, Love in Disguise, The Assassins, Chinese Paladin, The Third Way of Love, The Forbidden Kingdom, and The Return of the Condor Heroes. She is also a well-known singer. In 2006, Liu Yifei released her first Japanese single “Mayonaka no Door” with Sony Music. Her debut album, Liu Yifei, was released in 2006. Liu Yifei was born to Liu Xiaoli, a dancer, and An Shaokang, a diplomat and professor on August 25, 1987 in Wuhan, Hubei, China as An Feng. She spent her childhood in China and USA. She has been in a relationship with actor Song Seung-heon since 2015. 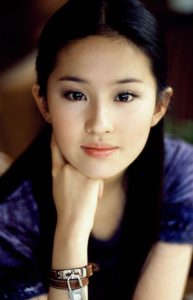 Liu Yifei Facts:
*She started modeling when she was 8 years old.
*At the age 10, she moved to the USA, and lived there for 4 years.
*She was named as one of the New Four Dan Actresses in China in 2009.
*Audrey Hepburn and Vivien Leigh are her favorite actresses.