Liza Soberano is an American-Filipino actress who rose to prominence by portraying the role of protagonist Maria Agnes Calay in the romantic comedy television series Forevermore from 2014 to 2015, opposite Enrique Gil. She has also starred in the films Just The Way You Are and Everyday I Love You, My Ex and Whys, and the television series Dolce Amore and Bagani. Born Hope Elizabeth Soberano on January 4, 1998 in Santa Clara, California, USA, to Filipino father John Castillo Soberano and American mother Jacquelyn Elizabeth Hanley, Liza moved to the Philippines at the age of ten to be with her father and relatives. She started as a print ad model at age 12 and was discovered by a talent scout when she was 13. She played a supporting role of Angel Gomez in the Filipino romantic comedy Must Be… Love in 2013. In 2015, she began dating actor Enrique Gil. 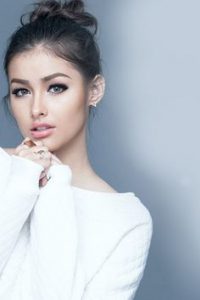 Liza Soberano Facts:
*She was born in Santa Clara, California, USA on January 4, 1998.
*She is half-American and half-Filipina.
*She started print modeling at the age of 12.
*She was discovered by her manager Tito Ogie Diaz when she was 13.
*She converted to Roman Catholicism in July 2015.
*She’s named as Campaign Asia-Pacific’s most popular endorser of 2017.
*She has been in a relationship with actor Enrique Gil since 2015.
*Follow her on Twitter, Facebook and Instagram.