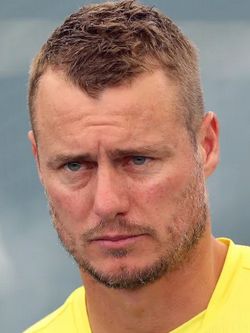 Lleyton Hewitt Facts:
*He was born on February 24, 1981 in Adelaide, Australia
*His father is retired Australian rules footballer Glynn Hewitt.
*He was ranked the No.1 in the world and was the youngest ever male player to reach this rank.
*He played for Australia in the Davis Cup. In August 2000, the Australian Government gave him the Australian Sports Medal.
*His skills and devotion eventually earned him position one junior tennis player in Austria in 1996.
*He won the US Open in 2001 and the Wimbledon Championships in 2002.
*He reached the final of the 2004 US Open, where he was defeated by Roger Federer in straight sets.
*He is the youngest Player ever in Austria to join the tournament.
*He is the most recent Australian to win a men’s singles Grand Slam title.
*He married Australian Stars Series Bec Cartwright in July 2005.
*Visit his official website: www.lleytonandbechewitt.com