Lo Bosworth is an American television personality, entrepreneur and writer. She became famous after being cast in the reality television series Laguna Beach: The Real Orange County. She also appeared in the series spin-off The Hills. Aside from her reality television career, she has written a book, The Lo-Down (2011). Born Lauren Ogilvie Bosworth on September 29, 1986 in Laguna Beach, California, USA, she belongs to Scottish, Irish and English descent. She has two younger siblings, a sister named Erin, and a brother, Christian. She attended Laguna Beach High School in Laguna Beach, California. She earned her bachelor’s degree in art history from University of California, Los Angeles (UCLA). In 2012, she began dating Jeremy Globerson. 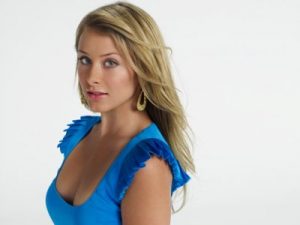 Lo Bosworth Facts:
*She was born and grew up in Laguna Beach, California.
*She is the oldest of three children.
*She appeared in the MTV’s reality TV series The Hills from 2007 to 2010.
*She has been best friends with Lauren Conrad since elementary school.
*She has a pet dog, Buster.
*Her favorite sports teams are the Los Angeles Angels, the Los Angeles Lakers, and the Oakland Raiders.
*Her favorite artists are Ashlee Simpson, Beyoncé, Maroon 5, Outkast and Atmosphere.
*She is the founder of the website: www.thelodown.com
*Follow her on Twitter, Facebook and Instagram.