Fabiana Udenio is an Argentine-born Italian actress. She is best known for her portrayal of Alotta Fagina in Austin Powers: International Man of Mystery. She played Gabriella in The 1994 comedy war film In The Army Now, and portrayed Giulietta in the ABC soap opera One Life to Live from 1985 to 1986. Udenio’s other notable works include Summer School, RoboCop 2, and The Wedding Planner. Born on December 21, 1964, in Buenos Aires, Argentina, she moved Italy with her family when she was young, where she was crowned “Miss Teen Italy” at the age of thirteen. She made her theatre debut as “Miranda” in “The Tempest”. Udenio was married to Robert McLeod from 2004 to 2009 and Judson Scott from 1986 to 1995. She has a son Adrian Raice MacLeod born in 2006 with ex husband Robert McLeod. 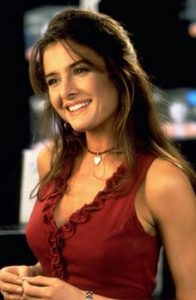 Fabiana Udenio Facts:
*She was born December 21, 1964 in Buenos Aires, Argentina.
*At the age of 13, she was crowned Miss Teen Italy.
*She began acting in television and films as a teenager.