Lorenzo Lamas is an American film and television actor best known for his roles as Lance Cumson on the 1980s soap opera Falcon Crest, Det. Reno Raines on the action-drama series Renegade, and as Hector Ramirez on the CBS daytime soap opera The Bold and the Beautiful. He was born Lorenzo Fernando Lamas in Santa Monica, California, to actors Arlene Dahl and Fernando Lamas. His mother was American, of Norwegian descent and his father was Argentinian. 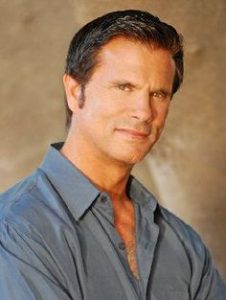 Lorenzo Lamas Facts:
*His mother was American, of Norwegian descent and his father was Argentinian.
*He earned his first major acting role with a small part in the classic film Grease (1978).
*He has a tattoo of a woman riding a unicorn on upper back/shoulder.
*He was the only actor or actress to appear in all 227 episodes of Falcon Crest (1981).
*His father, born in Argentina, was a movie star there, then he moved to the USA to be an actor in Hollywood.
*As a kid, he was a fan of Batman (1966).
*He is friends with: Erik Estrada, Patrick Duffy, Joan Van Ark, Susan Sullivan and Larry Manetti.
*Close friend of Ana Alicia.
*Follow him on Twitter and Facebook.