Italian professional tennis player who achieved a career-high singles ranking of World No. 26 on June 14, 2021, and a doubles ranking of world No. 132 on April 12, 2021. Turning professional in 2013, Sonego made his ATP main-draw debut at the 2016 Internazionali BNL d’Italia, where he received a main-draw wildcard. In June 2021, Sonego reached his fourth final in his career and second for 2021 at the 2021 Eastbourne International. 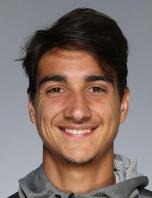 Lorenzo Sonego Facts:
*He was born on May 11, 1995 in Turin, Italy.
*He started playing tennis at the age of 11.
*A fan of Italian football club Torino, Sonego played for the Torino youth academy between the age of six and 13 before focusing on tennis.
*He turned professional in 2013.
*He made his ATP Tour debut on May 2016 at the Italian Open.
*He started his Grand Slam career with a win over Robin Haase at the 2018 Australian Open.
*Visit his official website: www.lorenzo-sonego.com
*Follow him on Instagram.