Luke Shaw is an English professional footballer who plays for Premier League club Manchester United and the England national team as a defender. Shaw primarily plays as a left back. A member of Southampton’s youth system, Shaw joined Southampton’s first team in January 2012 after spending close to 10 years in their youth system. He made his senior international debut for the England team in March 2014. He was a member of the England’s squads at 2014 FIFA World Cup and UEFA Euro 2020. 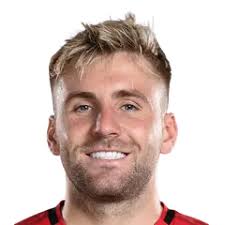 Luke Shaw Facts:
*He was born Luke Paul Hoare Shaw on July 12, 1995 in Kingston upon Thames, United Kingdom.
*His parents are Joanna and Paul Shaw.
*He began playing football at age seven with Southampton Academy.
*He grew up as a Chelsea supporter, and has claimed that he originally wanted to play for the London club.
*He signed with Manchester United in 2014.
*He represented England at the Under-16, Under-17, and Under-21 tiers before making his senior national debut on March 5, 2014.
*Follow him on Twitter, Facebook and Instagram.