Louise Linton, born December 21, 1980, is a Scottish actress who appeared in films such as Cabin Fever and a single episode each of television series CSI: NY and Cold Case. She has also appeared on the covers of, ‘I-On’ Magazine, ‘The Herald’ Magazine, ‘Seven Days’ Magazine, ‘Core’ Magazine,’Your Life’ Magazine, and ‘Scottish Woman’ Magazine. Linton was born in Edinburgh, Scotland to William Hay and Rachel Hay. She married Steve Mnuchin, the U.S. Secretary of the Treasury On June 24, 2017 at the Andrew W. Mellon Auditorium in Washington. It is the third marriage for Mnuchin and the second marriage for Linton. 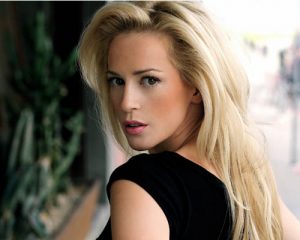 Louise Linton Facts:
*She is Scottish.
*Her family has a Castle in Scotland.
*She wrote a book about the Congo-African War.
*She was an animal activist and vegetarian.
*She attended same boarding school as Prime Minister Tony Blair.
*President Donald Trump, first lady Melania Trump, Vice President Mike Pence and several Cabinet members attended the Saturday night wedding of Mnuchin and Linton.
*Follow Louise on Twitter and Instagram.