Luan Santana is a Brazilian singer and songwriter whose first live album was a bestseller throughout 2010, selling over 100,000 copies. His second album was recorded live in December 2010 at the HSBC Arena in Rio de Janeiro and was released in 2011. The 1st song, “Adrenalina“, hit the top spot on the Billboard charts, and the 2nd single from this album, “Química Do Amor“, features Bahian singer Ivete Sangalo. His album 1977 was nominated for the 2017 Latin Grammy Award for Best Sertaneja Music Album. Born Luan Rafael Domingos Santana on March 13, 1991 in Campo Grande, Mato Grosso do Sul, Brazil, to parents Marizete Santana and Amarildo Domingos, he started singing at the age of three. 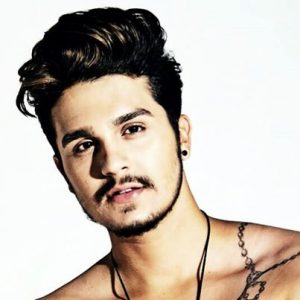 Luan Santana Facts:
*He was born on March 13, 1991 in Campo Grande, Mato Grosso do Sul, Brazil.
*He is the son of Amarildo Domingos and Marizete Santana.
*He began singing at age three.
*His father gave him a guitar to further encourage his musical skill.
*Visit his official website: www.luansantana.com.br
*Follow him on Twitter, YouTube, Facebook and Instagram.