Lucas Cruikshank is an American comedian, actor and YouTuber who created the character Fred Figglehorn and the associated Fred series for his channel on YouTube in 2005. He appeared as a guest-star as both “Fred” and himself on Nickelodeon’s iCarly in “iMeet Fred”. 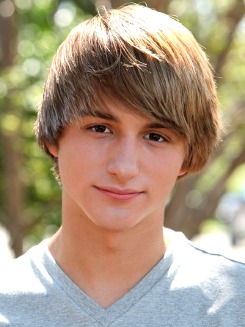 Lucas Cruikshank Facts:
*Born on August 29, 1993 in Columbus, Nebraska, he is of German, Irish, and Scottish descent.
*He started dancing in the fourth grade.
*He got his start by making videos with his cousins Katie and John, and posting them on You Tube.
*He created the famous character Fred Figglehorn.
*He uploaded his first YouTube video in 2008.
*His celebrity crush is Megan Fox.
*He doesn’t like horror movies.
*He came out publicly as gay in a YouTube video released August 20, 2013.
*Follow him on Twitter, YouTube, Facebook and Instagram.