Lucy Boynton is an American-British actress. She is best known for her roles in the films Miss Potter, Copperhead, Sing Street, Murder on the Orient Express and Apostle. For Miss Potter, she was nominated for the Young Artist Award for Best Performance in a Feature Film – Supporting Young Actress, in 2007. She also played the role of Mary Austin in the 2018 biographical film Bohemian Rhapsody. Her notable television credits include Sense & Sensibility, Borgia, and Gypsy. Born Lucy Christabel Boynton on January 17, 1994 in New York City, New York, USA, to Adriaane Pielou and Graham Boynton, she was raised in London, England. She has an older sister, Emma Louise Boynton. She was educated at Blackheath High School and James Allen’s Girls’ School. Lucy made her theatrical film debut as Young Beatrix Potter in the 2006 British-American film Miss Potter. In 2018, she began dating actor Rami Malek. 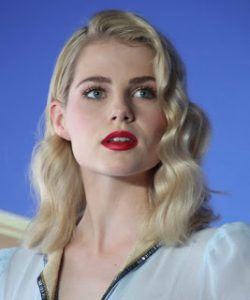 Lucy Boynton Facts:
*She was born on January 17, 1994 in New York City, New York, USA.
*She grew up in London, England.
*She has an elder sister, Emma Louise Boynton.
*She landed her breakout role in Sing Street.
*She is a dual American/British citizen.
*Follow her on Facebook and Instagram.